One of the most glorious globular clusters, the Great Globular Cluster in Hercules, has about 300,000 stars in the constellation of Hercules. I was out tonight testing a relatively new setup. A GSO RC (Ritchey–Chrétien telescope) 6" 1370mm focal length with SBIG 8300M yielding a somewhat over sampled resolution of 0,81"/px. When shooting in bin 2x2 though it gets to 1,63"/px which is closer to ideal (if the seeing is good :) ). 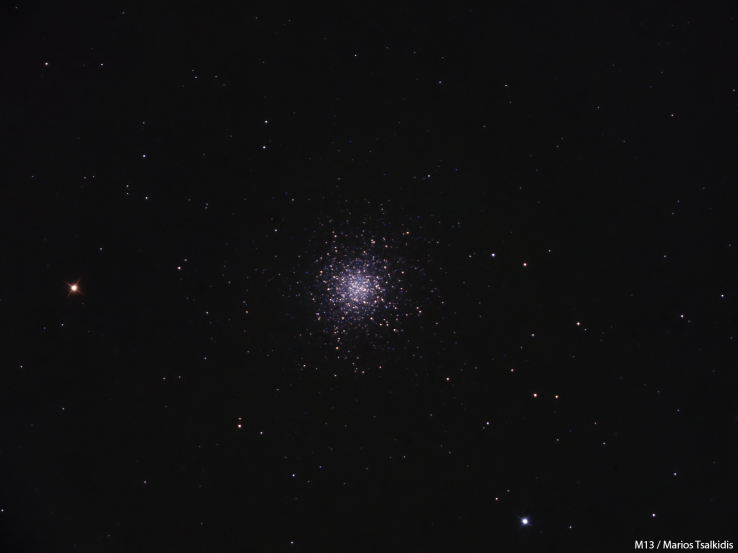 Other popular names in astronomy for the Hercules Globular cluster are : Messier 13 (M13) and NGC 6205. M13 was discovered by Edmond Halley in 1714, and catalogued by Charles Messier on June 1, 1764.
M13 is about 145 light-years in diameter, and it is composed of several hundred thousand stars, the brightest of which is a red giant, the variable star V11, with an apparent visual magnitude of 11.95. M13 is 25,100 light-years away from Earth.

With an apparent magnitude of 5.8, it is barely visible with the naked eye on a very clear night but you can easily spot it with a pair of binoculars or a telescope. Its diameter is about 23 arc minutes.
Nearby is NGC 6207, a 12th magnitude edge-on galaxy that lies 28 arc minutes directly north east. A small galaxy, IC 4617, lies halfway between NGC 6207 and M13, north-north-east of the large globular cluster's center.

Arecibo message
The Arecibo message of 1974, which contained encoded information about the human race, DNA, atomic numbers, Earth's position and other information, was beamed from the Arecibo Observatory radio telescope towards M13 as an experiment in contacting potential extraterrestrial civilizations in the cluster. While the cluster will move through space during the transit time, the proper motion is small enough that the cluster will only move 24 light years, only a fraction of the diameter of the cluster. Thus, the message will still arrive near the center of the cluster.
Maybe will hear back from Hercules Globular Cluster sometime in the future :D 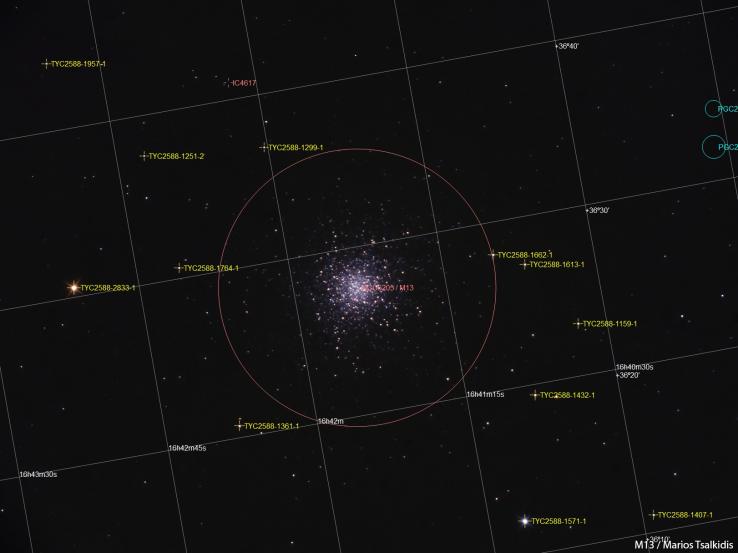